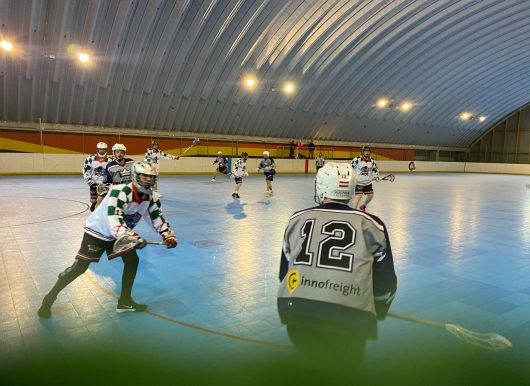 This weekend another round of the Slovak Box Lacrosse League was played, while this time matches were also played on Saturday and Sunday. On Saturday, the Bratislava Bats played against the Vienna Monarchs and the Trnava Sabers met the Polish Eagles.

In the first match, the clubs that form the core of their box lacrosse teams met, namely the Bratislava Bats and the Vienna Monarchs. Although they meet regularly in the Czech box lacrosse league and recently played against each other at the World Championships in Vancouver, no one could expect such a clear result. From the beginning, the fight was even, when the situation after the first quarter was 4: 3 and in the middle of the match 9: 7 for Vienna. Subsequently, Vienna ran off and no longer considered herself. Bratislava entered the offensive zone and regularly threatened the Vienna goal, but played like only half a gas. Together with sports luck, they kept the lead and won in the ratio of 20:11.

In the second match on Saturday, Trnava Sabers and Polish Eagles met against each other. The Poles started the match with their unambiguous physical game, which they maintained throughout the match. In the first quarter, the match was extremely balanced, as both teams entered the offensive zone and regularly threatened the goal. This was also evidenced by the 1: 1 score at the end of the first quarter. Subsequently, however, there was a weakened inventory of Trnava for frequent injuries, along with the aforementioned physical mountain Eagles. The Poles more or less settled in the defense of Trnava and spent long minutes in it. Sabers sometimes attacked, but with two exceptions, their goalkeeper was flawless. The Eagles managed the Sabers 9: 2.

On Sunday, the Bats met against the Eagles to fix their desire to lose to Vienna. Similar to Trnava, the Eagles entered the match with their physical game. The Bats tried, but their attack seemed to still play a match with Vienna. By the end of the third quarter, the situation was equalized, 4: 4. Subsequently, however, a mass battle ensued and penalty minutes flew to both sides. This probably aroused the attack of the Bats, which subsequently scored another 5 goals, while the Eagles failed to give either. The final state of the match was 9: 5 for the Bats and a total of 37 penalty minutes for the battle itself.

In the last match, Skalica Chiefs and Vienna Monarchs competed against each other. Skalici managed to keep up with Vienna almost the whole match, while after the third quarter the score was 8: 5 for Vienna. In the last quarter, however, experience and playability were shown, when they managed to score 9 goals in a row. Skalica tried, but they could no longer dramatize the match. The end result was 17: 5 for Vienna.

The next SBLL game weekend is scheduled for January 2020, so don’t forget to like our Facebook where we will inform you about the details of the last round.