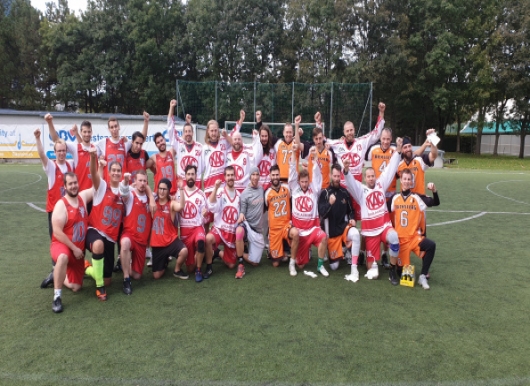 The Lacrosse Club Tricksters Bratislava had another successful appearance on international grounds when it became the first ever lacrosse tournament winner with the Olympic rules.

The tournament took place in Vienna and was attended by 4 teams. Domestic rulers from Vienna, Budapest, Mix team under the auspices of KAC and Tricksters Bratislava. The Olympic rules are quite different from those currently operating in field lacrosse or boxlacrosse. It is lacrosse up – down, with only 4 players out of play. In our case only 1, even the goalkeeper. Nevertheless, our party was not afraid of each match going to win. What we did.

We won the group after 20: 5 vs Budapest, 20: 8 vs Monarchs and 15:15 vs KAC. However, in our favour spoke quarters wins, so we received 2 points more than our opponent. This is also a difference from the standard rules, where every quarter is scored, and it forces every team to play to the 100 percent from start to finish.

In Sunday we got in the semi-final paper-lighter opponent, which was again Budapest. This time we scored 21 goals for the boys and got only 4, which moved us to the final of the tournament. There we were waiting for KAC, who surprisingly coped with the home team and so we could expect an interesting duel.

The match was fairly balanced up to the third quarter, in which our boys jumped out and developed a stronger lead. Despite the efforts of our opponents, we were already a game of art, brought the match to the winning end and could enjoy the trophies for the winner of the tournament.

It can be said that these modified rules resemble handball, on the other hand, in limiting the number of players, it will be very physically difficult to play a weekly tournament somewhere in the Olympics. By removing long clubs, lacrosse also lost some tactics that set it apart from Box Lacrosse. Imagine football players who play small football not eleven but only 6 at the Olympics, or basketball players would play streetball. Probably unimaginable, right? But we’ll see, Tricksters are practicing in this style long time.