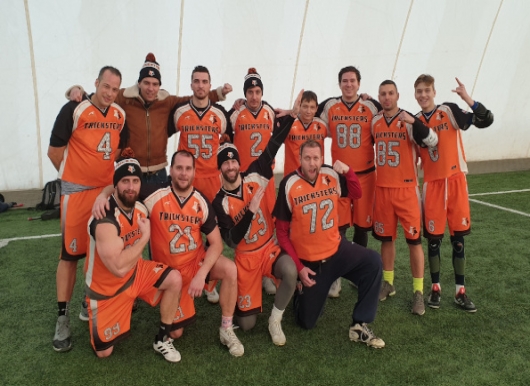 During the previous weekend, the annual New Year’s Cup lacrosse tournament was held in the capital of Hungary, Budapest, where our boys could not miss. This flow of tournament took place in a different place than traditional for prosaic reason. The owner of the course at its original location did not wish to play lacrosse. It is a pity…

Tricksters already had traditional tournament rivals, as if the organizers did not even deal with the drawing of groups. They met again with 3 same teams as they did last year. Old male participants in our group were Czech Malešice and it was this opponent who opposed the Tricksters right at the beginning of the tournament.

The Tricksters eventually went to the tournament in a quite interesting line-up. Missed seasoned representatives, on the contrary, in the cadre were introduced two newcomers who started playing lacrosse just a few weeks ago. The match was balanced from the beginning and the opening goal was scored by the opponent, but then the orange racket started and the lines of 5 goals turned the meeting. In the second half the opponent corrected 3 goals, but our chose time out, calm down and again scored goals that were decisive. In the end, Malešice did not avert the loss and the Tricksters booked a surprisingly first win at the tournament.

In the second match, the toughest opponent, last year’s finalist and last year’s winner, the Swiss club Olten Saints, was waiting for our guys. In the first half our players played well and despite losing 2: 0, they managed to equalize in half time. His first goal in the Tricksters jersey was scored by Veleg. In the second half, however, the opponent increased the lead and our boys failed to respond, eventually the Swiss succumbed 8: 2.

The third match of the tournament opposed two participants of the Danube Lacrosse League, Tricksters Bratislava and Graz Gladiators. This match was clearly a matter for the Tricksters, although the opponent was in a better line-up than in the league rounds. Nothing less Tricksters won 7: 3.

Sunday’s program of the tournament was started by our boys with the last game of the group against Russian Hero City and it was a lot to watch, because it was the second place in the table. The match was better for ours, but in the second half with their mistakes the Tricksters lost their lead and a well-played opponent turned the score. Our boys, however, did not give up and managed to balance. 12 seconds before the end of the match, our boys played weaker, but even though the opponent managed to score a goal, it only fell after the referee’s whistle. The final score remained unchanged 8: 8. Tricksters enjoyed the second place in the table and in the battle for the bronze medal awaited their traditional rival Vienna Monarchs.

In this match, our boys were fully tired from the tournament and even though they managed to keep up with the opponent, they finally triumphed and won 13: 5. The result was unambiguous because our players, frustrated by the performance of the main arbitrators, were unable to control emotions and sat on the bench of shame more than trying to score a goal. Despite the effort and militancy that our boys cannot deny, they still must work on a number of things and improve not only individually but also collectively.

This tournament, however, indicated to us who deserves to wear the jersey of the most famous lacrosse club in Slovakia and prepared our boys to fight in the next phase of the season.