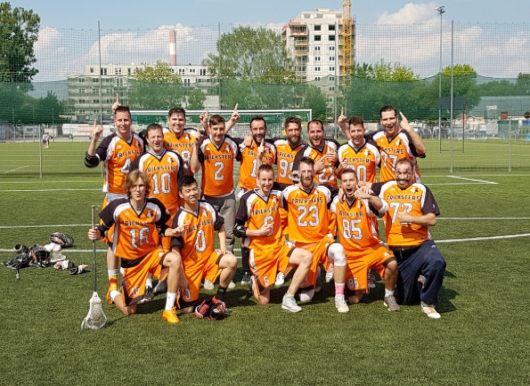 The Tricksters Bratislava lacrosse club won the international tournament in Vienna, the Austrian Lacrosse Open, which was held during the weekend of May 25 – May 2019.

This year was a bit poorer for teams when only four attended, but teams were good and strengthened by many players who would normally play for other clubs. The Tricksters have met with home Monarchs with whom they lost 8:5 in the first game despite good performance. In the second match, our boys again presented themselves against the old guard Monarchs and the Austrian national team. This quality team, we managed to beat 12:5, which meant that we have the power to go to the final of the tournament. It was enough to defeat another Austrian club Graz for which Hungarians, Slovenians, but even the German reinforcements that were shuttling between the teams. The third match of the tournament was quite clear, when our younger players got into the game and with 10:1 victory we sealed our participation in the finals, where we met with the home club Monarchs again.

We started the finals very well, our boys have already led 5:1, but then the moments of the home have come to 7:8. However, our boys did not break this development, on the contrary, they again took the match to their own hands and turned the score to 10:8. In the end, the opponent managed to reduce the dot to a good and interesting match gave the Seversky who closed the score to 11:9 for our boys. Boris Seversky was also eventually declared the MVP of the whole tournament and Tricksters Bratislava won again in this tournament after 8 years.