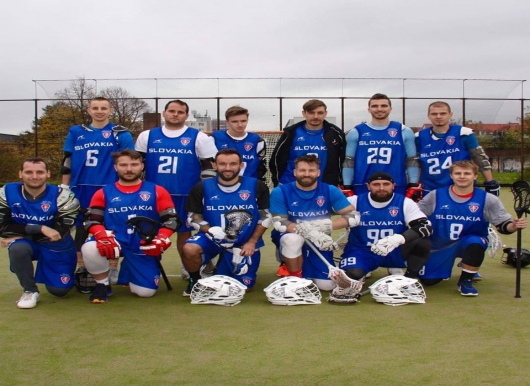 This weekend on the 9th and 10th November the Slovak Lacrosse Cup was played in Bratislava. In addition to the Slovak national team, teams from Germany, Latvia, Austria and Croatia took part as a preparation for the next years European Championship in Poland.

In the basic group our boys met against a strong selection from Germany. From the very first minute, the Germans took the game into their hands and were riding our boys from the midfield. We got into a few nice goalchances, but we couldn’t score on any of them. The German team worked exactly like the German stereotype and by the end of the match they managed to score 10 goals. The final score was therefore 10: 0 for Germany.

In the second match of the basic group we met with Croatia. We entered the game with greater confidence and appetite, which was also shown in our game. Although we made a few mistakesin the defense, our attackers and midfielders did not stop and at the end of regular playing time was shining 8: 3 for Slovakia. With one win and one loss, we took 2 place in the basic group.

On Sunday the Slovak national team met with our well-known opponent from Austria to see who will advance to the semifinals. We started the match slowly but surely as we controlled the game and its pace. Therefore, after the first half, the score was 2: 0 for our boys. At the beginning of the second half, the Austrian team scored 4 fast goals and we were a little surprised. We managed to reduce to just one goal, but the start of the Austrian did not stop until the final score was 6: 3 in their favor. After this match our guys will meet again with the Croatian team for 4th place.

The last match for our guys was full of emotions. Our hard game was retaliated by the judges by giving out penalties. Thanks to them, Croatia got into the lead quickly 3: 0. Our guys, however, unlike the match with Austria did not lay down and constantly created chances as the game constantly switched from one end of the field to the other. The final score of 7: 7 after regular time also shows the balance of the match. In the Overtime where the golden goal decides everything was played, we managed to win the face-off and get the game into the attack zone. It didnt spend much time there, because after a minute of play, thanks to Lichtner, the Croats had to fish it it from their goal.

The Slovak Represnetium placed 4th in the first year of Slovakia Lacrosse Cup and we are looking forward to seeing it again in a year. The Slovak Lacrosse Federation would like to thank the participating teams, the referees and the organizing team who prepared this tournament.

Final placement of the tournament: